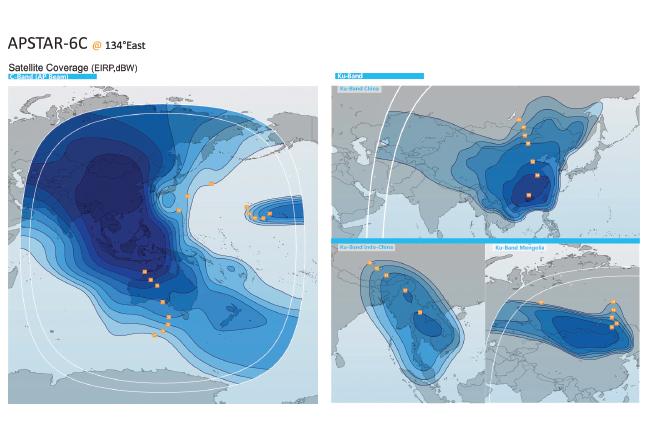 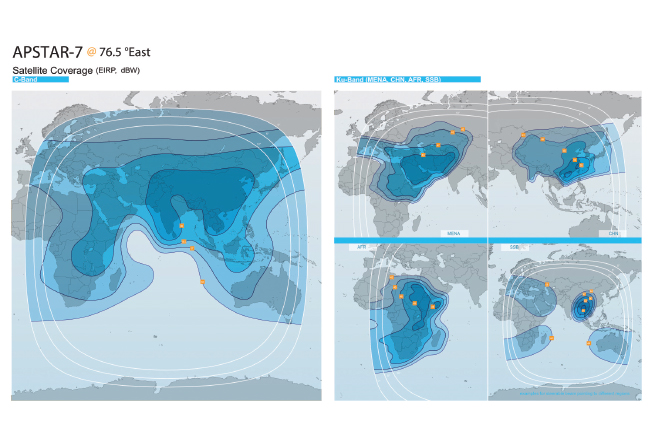 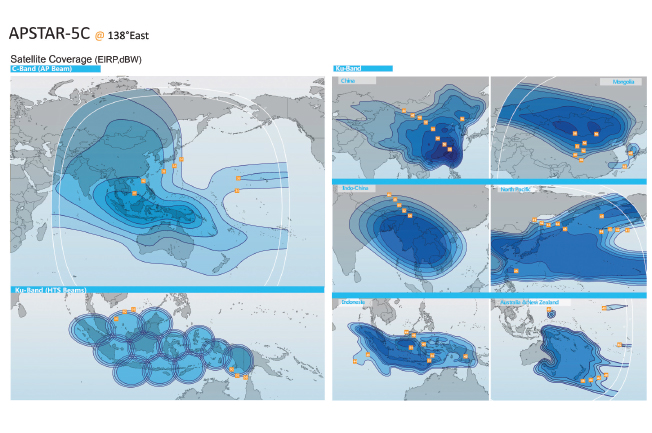 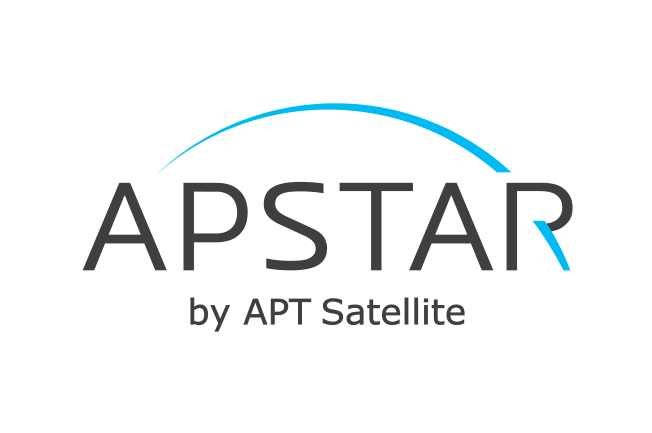 Broadcasting across a wide spectrum

Founded in 1992, APT Satellite currently owns a fleet of six in-orbit satellites, namely, APSTAR-5, APSTAR-6, APSTAR-7, APSTAR-9, APSTAR-6C and APSTAR 5C, forming the APSTAR fleet, covering regions in Asia, the Middle East, Oceania and most parts of Europe. This vast regional influence stretches across approximately 75% of the world’s population and provides excellent quality ‘one-stop-shop’ services for satellite transponder leasing, satellite telecommunications and satellite TV broadcasting and transmission to broadcasters and telecommunications customers.
To go in line with business development, the company is equipped with state-of-the-art ground facilities including satcom platforms and a TV broadcasting centre, pooling together versatile satellite frequency resources for the provision of TV playout and uplink, DTH, telecommunications and IP transit services.

APSTAR-6
Replaced by APSTAR-6C in 2018
APSTAR-7
Positioned at 76.5E, APSTAR-7 is based on the Thales Alenia’s SPACEBUS4000-C2 platform which is one of the most reliable satellite platforms present in the market today. The satellite is built with 28 C-band transponders and 28 Ku-band transponders.
APSTAR-7 has 28 C-band and 28 Ku-band transponders. The C-band global beam covers four continents: Asia, Europe, Africa and Australia. Through its advanced technology, APSTAR-7 provides improved communication performance, power and efficiency to customers. The four Ku-band beams cover China, the Middle East, North Africa and Central Asia and another steerable area that is complementary to the fixed beams.
Owing to its prime orbital slot, APSTAR-7 has the largest geographic coverage over all visible landmass including all of the Middle East, Asia, Australia, most parts of Africa and Europe and numerous islands scattered across the Pacific and Indian Oceans.
A number of well-known global broadcast service providers such as Sony Pictures (AXN), HBO, Disney, Hallmark, Globecast, BBC, as well as other regional broadcasters utilise APSTAR-7 for distributing their channels across the region.

APSTAR-6C
APSTAR-6C satellite was launched on May 4, 2018 by the Long March 3B launch vehicle from the Xichang Satellite Launch Center in Sichuan, China. Located at 134⁰E, APSTAR-6C satellite is designed and manufactured by CAST based on the DFH-4 platform with a designed life of 15 years. It is equipped with totally 45 transponders in C-band, Ku-band and Ka-band. As the most advanced satellite with the highest capacity in the DFH-4 series satellites, APSTAR-6C will provide satellite communication and broadcasting services covering Asia-Pacific region.

APSTAR-5C
On 10 Sep 2018 in Cape Canaveral, Florida, US, APSTAR-5C was successfully launched to space on a Falcon 9 rocket made by Space X. APSTAR-5C is based on the Space System Loral FS-1300 platform, it is equipped with C-band, Ku-band regional beams and Ku-band HTS payload, providing high power transponder services to customers across the Asia-Pacific region for VSAT, video distribution, DTH, maritime and broadband services.
APSTAR-5C’s mission slot is at 138E. By utilising a hybrid chemical-electric propulsion system, APSTAR-5C is expected to last more than 18 years in its station-keeping orbital slot. APSTAR-5C is also a host payload project between APT Satellite and Telesat, a Canadian satellite company, under its name of Telstar-18V. 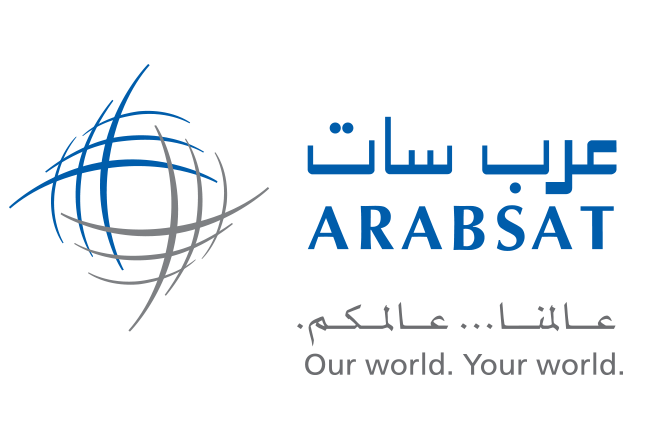 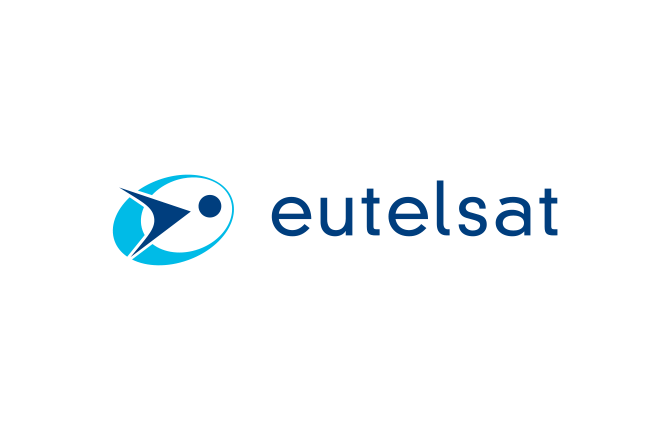 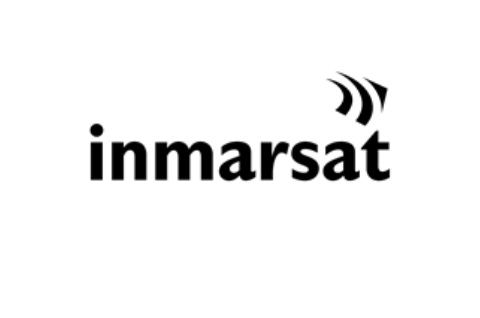 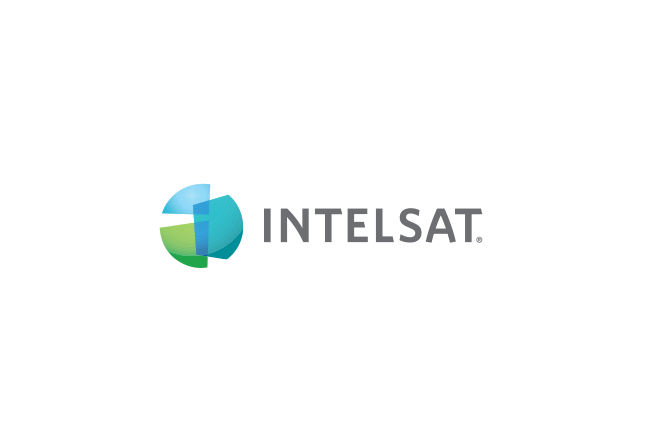 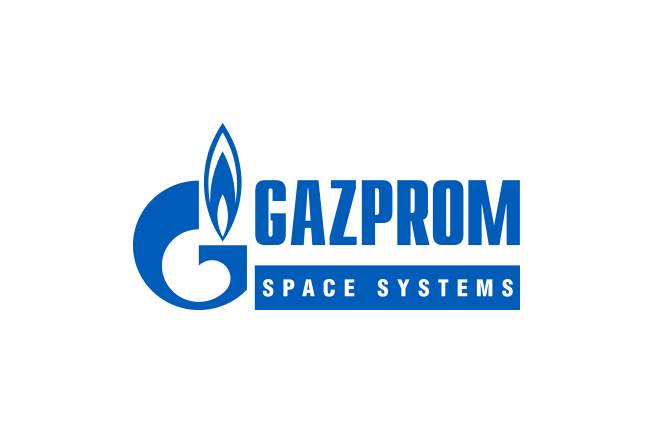 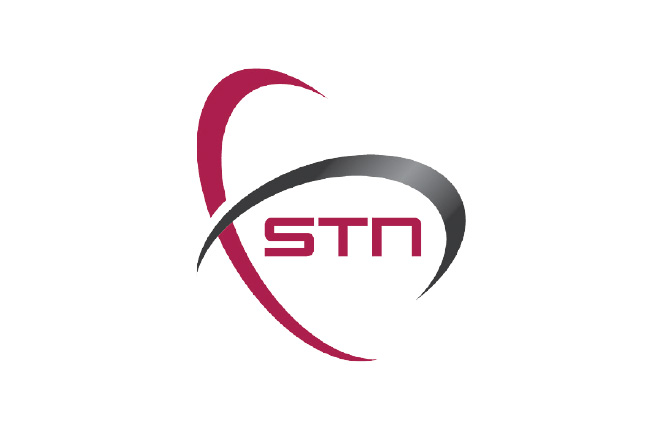 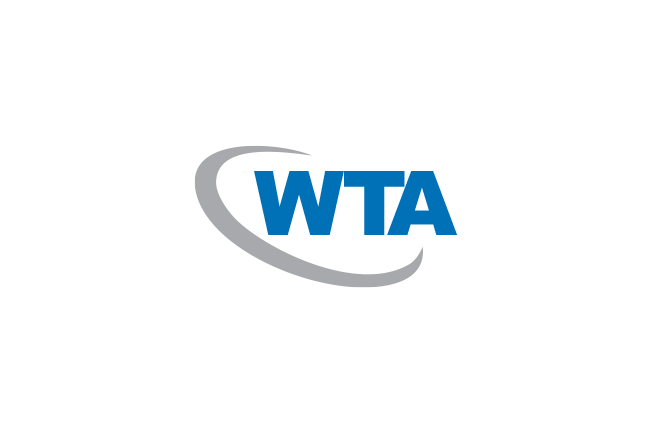